Today, the national debt exceeds $18 trillion and is expected to grow as six years of declining federal budget deficits come to an end this year, according to a recent analysis from the Congressional Budget Office (CBO).

Even with a growing economy, revenues coming into the government’s coffers will not keep pace with spending, especially given significant mandatory expenditures. At the same time, today’s tax rates are significantly lower than 50 years ago. In fact, the highest marginal tax rate has hovered around 35% most of the time since the mid-1980s. 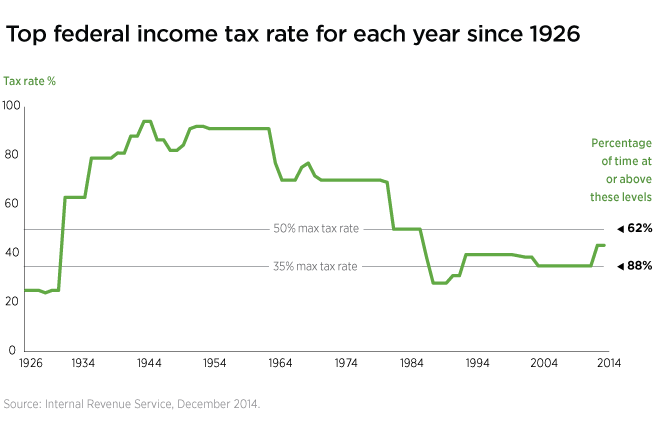 The total national debt — money owed by the United States and measured by the value of outstanding Treasury securities — was $18.9 trillion as of January 20, 2016, the Treasury Department reported. The nation’s debt has more than doubled since 2007.

Budget deficit to increase in 2016

The federal budget deficit, which represents the shortfall between government revenue and spending for one year, totaled $439 billion — or 2.5% of GDP — in 2015. This represented the lowest level since 2007 and, in percentage of GDP, was below the average deficit over the past 50 years. Fiscal year 2015 was the sixth straight year that the deficit had declined as a percentage of GDP since it peaked in 2009.

In its January 19, 2016 update, the CBO stated that the deficit will increase for the first time since 2009. The projection is for a $544 billion deficit, representing 2.9% of GDP.

The CBO’s January outlook is $130 billion higher than its August projection of $426 billion. The increase is largely due to bills that became law after August, including the retroactive extension of a number of tax provisions.

The deficit would also cause an increase in the national debt to about 76% of GDP by the end of 2016, reflecting an increase of two percentage points compared with last year, the report noted.

A significant portion of mandatory spending is Social Security, which is expected to increase by 3% this year. Other major sources of mandatory program spending include Medicare, Medicaid, the Children’s Health Insurance Program, as well as the cost of health-insurance subsidies, which are expected to be 11% higher in 2016 than in 2015, according to the CBO.

Federal revenues are expected to rise by only 4% in 2016. And CBO projections indicate expenditures will outpace revenue for the next decade.

If current laws remain unchanged, the deficit is expected to grow over the next 10 years, and by 2026 it would be larger than its average over the past 50 years, the CBO stated. The budget deficit is expected to increase modestly through 2018 but then rise more sharply, reaching $1.4 trillion in 2026. As a percentage of GDP, the deficit would climb to about 4.9% by the end of the 10-year period.

Social Security is the largest single program in the federal budget, the CBO points out. As U.S. life expectancy increases, more and more Americans qualify for benefits. In fiscal year 2015, Social Security benefits totaled nearly one quarter of all federal spending. According to CBO projections, Social Security’s trust funds will be exhausted in 2029. At that point, the result would be a 29% reduction in benefits.

BOSTON, January 20, 2016 — Putnam Investments today announced it is launching a multi-faceted program to help advisors — and their clients — navigate some of the most vexing challenges of today’s financial markets, as investors confront low interest rates, highly volatile markets and geopolitical instability.

Named “Maneuver in Markets™,” the broad-based Putnam informational campaign is designed to provide the advisor community with an ongoing stream of timely observations and perspectives to create deeper understanding of the rapidly changing market environment and potential investment strategies to help clients achieve their key financial goals, despite prevailing headwinds.

“In recognizing that meticulous investment research and flexible management strategies are crucial to helping investors “maneuver in markets,” we will be bringing a new dimension to our dialogue with the marketplace this year,” said Robert L. Reynolds, President and CEO, Putnam Investments. “As a firm that has spent years piloting investors through virtually every type of investment climate, we are committing the full force of our resources and best thinking to help advisors steer their clients through these times.”

In discussing the “Maneuver in Markets” campaign, William T. Connolly, Co-Head of Global Distribution, Putnam Investments, said, “The high-quality, thoughtful advice dispensed by financial advisors has never been more important than it is today. Putnam recognizes that there is a critical need for new levels of insight on the drivers of current market conditions and how to solve for optimal outcomes. Advisors will be able to count on a steady flow of new, high-impact research, analysis and tools that they can apply to their work in guiding clients.”

Mark McKenna, Head of Global Marketing, Putnam Investments, indicated that there will be a frequent delivery of robust content to the marketplace — through a host of different vehicles — to support advisors and their clients on the most topical investment issues of the day. Primary components of the “Maneuver in Markets” program will include regular updates on www.putnam.com, thematic video commentary from portfolio managers, investment webinars, expert white papers on a range of topics, social media, and digital and print advertising.

The firm expects to have a series of updates on the program throughout the year.

BOSTON, January 12, 2016 — Putnam Investments today was announced the recipient of the DALBAR Total Client Experience award for the fifth consecutive year, reflecting the firm’s dedication to delivering superior customer service to its retail mutual fund clients. As the sole recipient of the award, Putnam is being honored for providing quality, accuracy, and client security.

The award is based on DALBAR’s measurement of the complete experience of the customer, evaluating the level of professionalism that is demonstrated by the financial services firm’s personnel and the follow through — the accurate execution of transactions and requests while ensuring thorough security protocols.

“Putnam is pleased to receive this special recognition from DALBAR,” said Robert L. Reynolds, President and Chief Executive Officer, Putnam Investments. “Our firm’s longstanding commitment to creating an excellent client service experience is a chief priority of our work — each and every day — and reflective of our philosophy that the client always comes first.”

2015 marks the 26th consecutive year in which Putnam has received a DALBAR service quality award.

About DALBAR
DALBAR, Inc., the nation’s leading financial services market research and consulting firm, is committed to raising the standards of excellence in the financial services industry. With offices in both the US and Canada, DALBAR develops standards for, and provides research, ratings, and rankings of intangible factors to the mutual fund, broker/dealer, life insurance, property and casualty, and managed account industries. Measurements include investor behavior, customer satisfaction, service quality, communications, Internet services, and financial professional ratings.

BOSTON, January 11, 2016 — Putnam Investments today announced that the firm’s Boston-based headquarters will be located at 100 Federal Street in the city’s financial district, with the move of personnel slated for 2018.

The firm has secured a 15-year lease agreement with Boston Properties for nearly 250,000 square feet of space — equating to 11 floors, along with a highly visible presence in the lobby and on the building’s facade. Putnam expects to have approximately 1,000 employees in the new facility after relocation, with flexibility to accommodate expected growth of the firm’s employee base in years to come.

“As a firm that takes great pride in its Boston heritage, Putnam Investments is extremely pleased to establish our global headquarters in a building that is a powerful presence on the city’s landscape, symbolizing the strength of the region’s financial services industry,” said Robert L. Reynolds, President and Chief Executive Officer, Putnam Investments.

Reynolds explained that it was a top priority to maintain and strengthen the firm’s nearly 80-year roots in Boston, which has long been considered a premier international city and a world-renowned center of education — with an extraordinarily deep talent pool, a thriving financial hub and a well-recognized quality of life.

“Our corporate headquarters has always been a reflection of our identity, sense of purpose and commitment to excellence, as we do our best each day to serve clients and deliver strong investment performance,” indicated Reynolds. “The 100 Federal Street location offers the ideal mix of modern, high-quality facilities in the heart of Boston’s financial district, with flexibility of space that will allow our firm to grow its onsite presence — as our business grows — over time.”

Putnam will be making the move to 100 Federal Street from its current headquarters, located at One Post Office Square, where the firm has been based since 1978. Presently, the firm leases over 240,000 square feet at the facility.

In addition to its downtown Boston location, Putnam maintains a sizable office north of the city in Andover, Massachusetts, which houses a number of key operations and functions for the firm. Putnam expects to continue to expand its Andover presence in future years.